Feel free to get in touch anytime , whether it’s support for an order or advice on what would suit you best. Use the contact form below, or the details here. 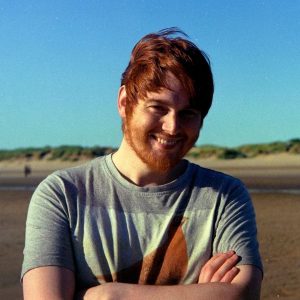 This is the daft git who’ll be replying to your email.

Digistock isn’t a big company with a bustling office and a social media team. Most of the time it’s just me, Kyle May, a photographer from Liverpool UK with a love of analog film and way too much time on my hands…

I shoot weddings, events and portraits full-time (at least I did until some guy ate a bat and the world went crazy). I’m a recovering musician, and also an amateur historian who spends way too much time underground in abandoned tunnels, bunkers etc. I’m used to shooting in all kinds of crazy locations and lighting conditions.

A couple of years ago I created a couple of styles for Capture One for my own use while shooting weddings etc – I wanted to get in the general ballpark of Portra 400 in a way that was subtle and natural enough that I could basically stick it on anything. After using (and tweaking) it for years I figured I might as well see if it was useful to anyone else so I went back and began developing a proper set which became the Portra 400 Pack. I stuck it in an online marketplace with no fanfare or advertising, expecting maybe a bit of beer money.

To my surprise, people really liked it. Sales picked up far more than I expected and I started getting positive feedback. So I went back and started working on my favourite mono film, which became the Tri-X Pack. And people liked that too, so I just kind of kept experimenting and tweaking. Fast forward a year, and I’ve ended up pouring remarkable amounts of time and money into making better and better emulations of film looks. I’m adding new features that nobody else does, pusning the limits of what can be achieved inside raw editors, and shooting and scanning test rolls to build custom profiles and LUTs so I can absolutely nail those colours.

Well I’ve got to thank British discount retailer Poundland for that! A few years ago they started selling rolls of ‘Agfa Vista 200’ (rebranded Fujicolor C200) for a mere £1 (about $1.30). I walked out with an armful! Up until then I’d only shot film occasionally due to the cost, but at £1 a pop I could go nuts and experiment. My local 1hr photo place would develop them for £2 and then I scanned them at home with a lovely Coolscan 900 I got from a friend.

I ended up with a huge collection of vintage cameras, from my grandad’s treasured Ilford Sportsman (still working flawlessly after over 60 years) to folding cameras built in pre-war Germany. My go-to camera is either the Pentax ME Super or my battered Olympus OM-1. I don’t shoot so much medium format though; I think Oskar Barnack really nailed it by choosing 35mm for the Leica I – I love that 3:2 aspect ratio!

But for me it’s really good fun to see how close I can emulate film, just for my own pride’s sake. It can also be very useful – for example, I do vintage fashion shoots and it’s very handy being able to call up a totally believable, natural period-correct look with a few clicks.

I was selling everything under my own name but always found that a bit dull and uninspiring; the internet is littered with generic cheesy ‘signature’ presets from Instagrammers and Influencers, and I wanted to set my product apart as something more than some trendy filters.

As my hobbyist preset fiddling rose in popularity,  I made the decision to switch to Digistock because it’s fun, snappy and gets straight to the point. If I had a really cool unique name maybe I would’ve stuck with it, who knows.

‘Ektar’, ‘Kodachrome’, ‘Portra’, ‘Tri-X’, ‘Kodak’, ‘Fuji’ and other trademarks feature to help illustrate customers understand our products’ intended uses, and do not represent an endorsement or licensed product.

Menu
The EU is responsible for a lot of great things, but the daft Cookies notice law isn't one of them. However, we have to show you this notice so you know that while using this site, we'll save tiny bits of info ('cookies') we use to remember who you are and keep track of info like 'what's in your basket?'. We hope that's ok. It's OK